CELEBRATING 40 YEARS OF INDISCRIMINATE HELP IN THE WORST OF TIMES 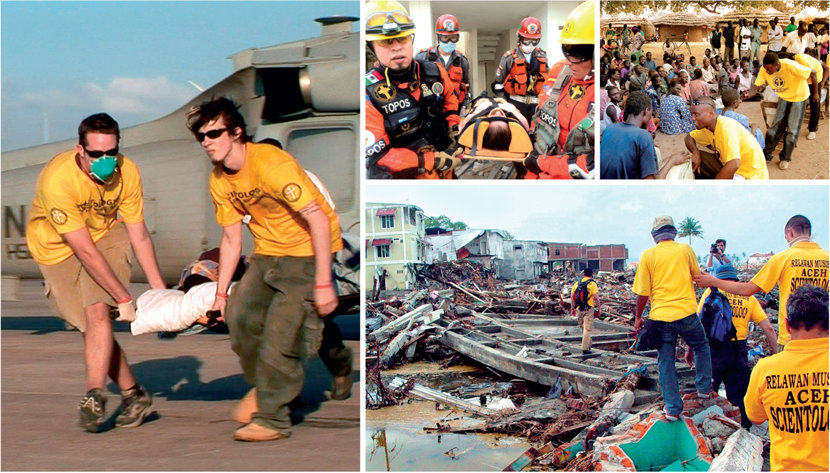 In his essay, Mr. Hubbard further writes: “If one does not like the crime, cruelty, injustice and violence of this society, he can do something about it. He can become a VOLUNTEER MINISTER and help civilize it, bring it conscience and kindness and love and freedom from travail by instilling into it trust, decency, honesty and tolerance.”

That spirit of conscience and kindness is demonstrated nowhere better than in times of disaster, when Volunteer Ministers (VMs) from 120 nations are often the first to respond.

Most recently, this spring when an earthquake in Ecuador left some 4,000 injured and 10,000 homeless, VMs worked with local emergency personnel to distribute clothes, food, water and other essentials, while delivering assists and life-skills training to victims.

Since 2001, Volunteer Ministers have responded to every major natural disaster on Earth—approximately 200 in all—from Canada to the Solomon Islands and everywhere in between. In so doing, they have provided indiscriminate help to 30 million people in 126 nations.

In the words of the Deputy Chief of Field Operations in Louisiana, after 1,000 VMs from across the globe answered the call following Hurricane Katrina, “You all were the cavalry. It was like wagon trains being surrounded by the Indians with no hope. Then you hear that horn from the cavalry and you guys came in. Then all of our despair disappeared because of your presence, your actions, your smiles.”

And across the globe in New Zealand, after the 2010 earthquakes, a disaster response coordinator captured the spirit in which the Volunteer Minister program was created four decades ago when he said: “These angels just appeared in the middle of chaos without any fanfare and just presented themselves to me and said: ‘We’re here to help.’”

TAKING ACTION
Change Conditions for the Better in all of Life

A Volunteer Minister in Kaohsiung, Taiwan gives an assist after the 2014 gas explosions.

“A Volunteer Minister is a person who helps his fellow man on a volunteer basis by restoring purpose, truth and spiritual values to the lives of others,” wrote L. Ron Hubbard when he defined the role of a VM in 1976.

“A Volunteer Minister does not shut his eyes to the pain, evil and injustice of existence. Rather, he is trained to handle these things and help others achieve relief from them and new personal strength as well.